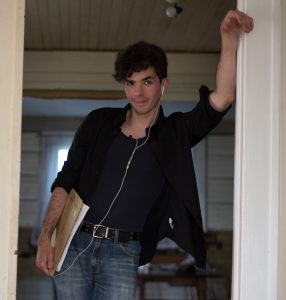 My name is Marty McCarthy. I’m a graduate of the UNCSA School of Filmmaking’s 2017 Producing Class. My dream is to produce and write daytime television animation.

I’ve been in love with cartoons for as long as I can remember. Before the internet came along and changed my life forever, I used to make cheesy little animations as a kid in “Amazing Animation”, an old Windows 95-2000 era CD-ROM program that allowed you to very easily manipulate stamps, drawings, or images on a 2D plane. When internet did eventually thrust itself into my life in the early 2000’s, I spent all my time on newgrounds.com, which during its heyday was a thriving community of talented and upcoming animators. I owe a significant portion of my appreciation of animation to the countless hours I spent downloading and editing 2D spritesheets of popular video game characters during those years. I must’ve gone through thousands of individual frames of animation on my poor old Windows 2000 200MB harddrive. Unfortunately, I was never able to get my hands on Macromedia Flash, so I didn’t have the chance to create and share my own animations on newgrounds (although maybe that’s actually a very, very good thing).

Despite all that however, it wasn’t until halfway through college that I would fully commit to my passion for animation. When it came to subject, I found I’d give myself the classic excuses: “I’m not good enough at drawing”, or “it’s so hard to do and takes so long”, or the worst one, “cartoons are childish and I’m an adult now”. I bounced from one thing to another: including dance, drama, singing, and filmmaking. I even wanted to be a professional gamer at one point (the most I ever won was a $20 gift card). But after two failed animation projects in my junior and senior years at UNCSA, I eventually joined the team as the producer on Supernova, a 3D animated short, which only made me more sure than ever that world of cartoons is where I belong.

While I’m no animator myself, I realized that I’m at my happiest and most driven when I’m contributing in some way to a small piece of a bigger project. Whether that’s drafting up yet another schedule, configuring productivity software, running a meeting, or just taking notes, I love feeling like I’m a part of something. At nearly every level of the production of an animation, from the formulation of the idea, to the early designs, to the color and the compositing, there is always so much opportunity for creativity and individualistic expression. I love seeing a simple idea spring to life in a variety of different, unexpected ways, and my dream is to be right in the middle of where that happens, and to one day tell my own stories in the medium.

Please reach out to me for any questions, comments, or 1v1 requests in Super Smash Bros. Melee at my email: Marty@MartyMcCarthy.com.

Thank you for taking the time to read about me, and I hope you enjoy viewing my website!